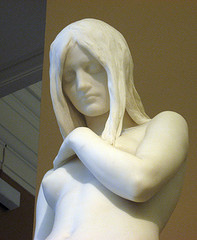 Mother’s Day is just a week away! We hope you’ll take some time this coming weekend to pay respects to your mother—or if that isn’t possible, to somebody in your life who embodies the grace and wisdom we associate with godly mothers.

The Bible speaks highly of mothers who raise children and guide their families in a righteous manner; in the oft-quoted Proverbs 31, the “wife of noble character” is honored by her husband and children for her virtues. Mothers and matriarchs of the Bible exhibit qualities that all of us, male or female, parent or not, should strive to emulate. This week we’ll tell you about some of the wonderful mothers of the Bible. Appropriately, we’ll start of with Eve, the very first mother.

Eve is the first woman in the Bible and her story is famous. God created the universe, the earth, animals and two humans. God named the man Adam; Adam named his wife Eve. Adam and Eve had a marriage that was made in heaven and was lived out in paradise. But paradise was lost when this first couple succumbed to a temptation to sin that was offered by Satan. They sinned against God and contaminated not only their own lives but the rest of the human race. Although Adam was equally guilty, Eve has gotten more of the blame.

Her motherhood was in the forefront, before the fall. Her motherhood is what her husband wanted us all to remember about her. The first time her name is mentioned in the Bible is in a quote from Adam in Genesis 3:20: “Adam named his wife Eve,
because she would become the mother of all the living.”

Modern mothers can learn from the Bible’s lesson about Eve. Whether you make small mistakes or great mistakes, what you are most remembered for is being a mother who impacts the lives
of others.

Here is a link to more about Eve’s story.