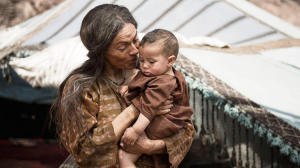 Second in our list of mothers is Sarah. Sarah lived generations after Eve. She was a truly amazing woman. Sarah was absolutely gorgeous. The Pharaoh of Egypt wanted to recruit her for his harem, as did another king named Abimelech. She was beautiful on the inside as well. The Apostle Peter held her up as an example to all women: “Cultivate inner beauty, the gentle, gracious kind that God delights in. The holy women of old were beautiful before God that way, and were good, loyal wives to their husbands. Sarah, for instance, taking care of Abraham, would address him as “my dear husband.” You’ll be true daughters of Sarah if you do the same, unanxious and unintimidated.” (1 Peter 3:3-6 The Message).

She was adventurous. She was a pioneer who left her home country and moved to another country and began all over again, leaving everybody she knew behind. She was also infertile. The one dream of her life was to become a mother, and she couldn’t do it. God promised Sarah a miracle. When she was 90 years old God announced that she would bear a son. Her reaction to God’s promise that she would have a son was to laugh, as memorably recorded in Genesis 18. God had the last laugh though. She did give birth to a son, and her lineage would include Jesus Christ himself. She lived a long life of 127 years.

Sarah learned a lesson for every mother to learn, and that is that God does the impossible. He can bring victory to what appears to be the most hopeless of situations.