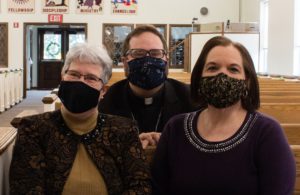 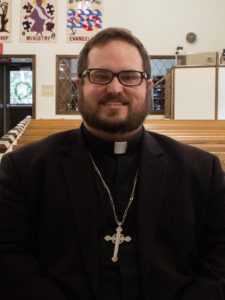 Pastor Adam Thompson was installed as the Pastor of Ascension Lutheran Church on December 6, 2020. Before coming to Pittsburgh, he served a call in Fairlawn, OH as an Associate Pastor specializing in Family and Youth Ministry. He graduated from Concordia Seminary in St. Louis, MO in 2016. When he isn’t at church or visiting with the people of Ascension, you can find him walking his dog Tucker, hiking, or playing tennis. He feels blessed and excited to serve as your Pastor!

You can get to know Pastor Thompson personally and pastorally via his video messages here and here. If you have a confidential pastoral request you can contact Pastor Thompson here. 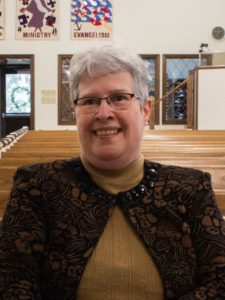 Barb has been a member of Ascension Lutheran Church since 2001 and the Administrative Assistant at Ascension since April 2008. She is married to Bob Marcellus, whom she has known since birth (their mothers were roommates in the hospital where they were born one day apart). God brought Barb and Bob together many years later at a mutual friend’s wedding when Bob was in the Air Force in California and Barb was a paralegal in Pittsburgh.  They were married shortly thereafter and spent the remaining eight years of Bob’s military career living in California, Iceland, and South Carolina.  God blessed them with daughters Lisa and Emily who were born in California and Iceland, respectively.  Barb worked as an at-home medical transcriptionist while her daughters were young up until she began working at Ascension in 2008.  Barb enjoys reading, spending time with family, and traveling.  Barb is happy to be serving the Lord at Ascension!

Vanessa has been a musician most of her life, following in the footsteps of her mom, who was a church organist and swing band pianist. She was born in Johnstown, PA, and spent much of her life moving to several towns in Virginia and Maryland, playing flute, clarinet, and saxophone in marching and jazz bands. She enjoyed it so much that she became a Band Director, studying music at Frostburg State University in Maryland, where she pursued both instrumental as well as vocal opportunities. During her years in Pittsburgh, she has been a teacher, performer, and church music director. Vanessa’s hobbies include sewing and making jewelry as well as camping and being outdoors. She feels blessed to help lead the amazing team of musicians at Ascension and work with children and adults to bring glory to God through a wide variety of sacred music.