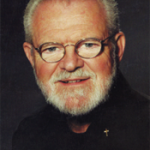 William Wilson • Christian Speaker and Consultant
When: 9-17-2016, 9am to noon
Where: 8225 Peebles Road, Pittsburgh 15237
Info: 724.444.8721 or info@ascensionpgh.comAscension Lutheran Church is hosting Father William Wilson, a former Trappist monk and current leader of the Southern Fellowship, a non-denominational Christian ministry, for a speaking engagement addressing a living relationship with Christ.

“God loves us personally with all His Love unconditionally and independently of our moral behavior. God’s grace gives us a new way of being and a new way of living. This new life is not about observing a moral code. It is about receiving Jesus in faith and love. Grace begins when we begin to trust in Jesus as the Son of God and Savior of the World who loves us personally.” – excerpted from Grace and Life, William Wilson.

William works in tandem with local congregations through the United States by offering teaching, pastoral counseling, and spiritual direction to members of the congregation, under the authority of the local pastor.

William grew up amidst alcoholism, poverty, and street gangs in the inner-city of Philadelphia. Seeking union with God, nineteen year old William became a silent Trappist monk for the next 25 years. In 1981 William went to live and serve among the poorest people in the world in the Bolivian Andes. As a Trappist monk William had learned the ancient ways of union with God in solitude. As a missionary among the poor, he learned to seek and find union with God while loving people.