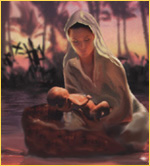 Our third mother of the Bible is Jochebed, the mother of Moses. Her appearance is short and we are not told much about her, but one trait stands out: trust in God.

The Jews had been in Egypt 400 years. The Pharaoh in the opening of the book of Exodus was afraid of the Jews because there were so many of them. He feared they would join a foreign army against the Egyptians or start a rebellion. He ordered all male Hebrew babies to be killed.

When Jochebed gave birth to a son, she saw that he was a healthy baby. Instead of letting him be murdered, she took a basket and coated the bottom with tar, to make it waterproof. Then she put the baby in it and set it among the reeds on the bank of the Nile River. At that same time, Pharaoh’s daughter was bathing in the river. One of her maidservants saw the basket and brought it to her.

Miriam, the baby’s sister, watched to see what would happen. Bravely, she asked Pharaoh’s daughter if she should get a Hebrew woman to nurse the child. She was told to do that. Miriam fetched her mother, Jochebed—who was also the baby’s mother—and brought her back.

Jochebed was paid to nurse and care for the boy, her own son, until he grew. Then she brought him back to Pharaoh’s daughter, who raised him as her own. She named him Moses.

Jochebed showed great trust in God’s faithfulness. Two lessons emerge from her story. First, many unwed mothers refuse to have an abortion, yet have no choice but to place their baby for adoption. Like Jochebed, they trust God to find a loving home for their child. Their heartbreak at giving up their baby is balanced by God’s favor when they obey his command not to kill the unborn.

The second lesson is for heartbroken people who have to turn their dreams over to God. They may have desired a happy marriage, a successful career, developing their talent, or some other worthwhile goal, yet circumstances prevented it. We can only get through that kind of disappointment by turning it over to God, like Jochebed put her child in his care. In his gracious way, God gives us himself, the most desirable dream we could ever imagine. Like Jochebed, we won’t always foresee God’s purpose in letting go, but we can trust that his plan is even better.