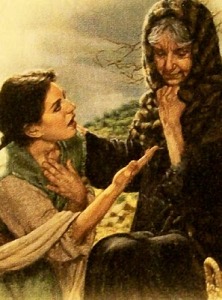 Naomi’s story had a bleak beginning. She was a foreigner in Moab, a country near to, but  hostile to, her native country Judah. Her life wasn’t always so bleak.  She had been a married woman with two grown sons – in other words comfortably off and secure.  Naomi means “pleasant” just like her life but then she lost everything. After leaving Judah to escape a famine, her husband died and so did her two fine sons and she had no grandchildren.  When she eventually returned to her native village to try and salvage something of her life, the years were etched into her face. ‘Can this be Naomi?’ they asked.  Naomi’s response revealed her state of mind: “don’t call me Naomi (pleasant); call me Mara (bitter) instead. The years have been unkind to me. I’ve lost everything.”

Naomi’s story is not unique. She belongs to a large sisterhood of mothers who have lost children they loved. There are no words to describe the loss.  There are no remedies to fully heal the soul. There is no later joy to fill the void of lost children. There are no Mother’s Day flowers for those whose children have died. There would be no Sarah-like miracle for her; no surprise pregnancy in old age.  She would never have children again.  She had only her pagan daughters-in-law Orpah and Ruth. Ruth had inherited nothing and had nothing of value. Her only choice was to return to her home village where she owned a little piece of land and where her relatives still resided.  She gave her daughters-in-law the choice of coming with her or returning to their own native lands.  Orpah returned to her land but then something amazing happened. Ruth asked her mother-in-law to take her along with her back to Israel. She wanted to convert from a pagan Moabite to a believer in God. Why would she do that? Why not send her mother-in-law, who was so bitterly depressed, back to the land from which she came? Why did she want to be like her? Because Ruth saw in Naomi, in the midst of her grief and bitterness, a God who was powerful . . . and she wanted that God.

Sometimes we think that when we are at our very worst there isn’t anything attractive about us and certainly no evidence that God is there. But it was far to the contrary. God’s power and presence showed through anyway. It is like the words of Jesus recorded in 2 Corinthians 12:9: “My grace is sufficient for you, for my power is made perfect in weakness.”
Read the actual account of Naomi and Ruth here.